The "Rule of Thirds" in photography... how to compose a better shot!

One of the easiest and fastest ways to improve your image whether it be in a formal portrait or even in a facebook or instagram shot is the "Rule of Thirds".  It's easy and improves your image big time!
Photographers use the rule of thirds as one of their most useful composition techniques. It's an important concept to learn as it can be used in all types of photography to produce images that balance out the subject and better engages the viewer.  Artists use it all of the time!
Of course, rules should never be applied blindly, particularly in art, so you should think of it more as a handy "rule of thumb" rather than one that's set in stone. But it makes a better photo more often than not, and is an excellent starting point to compose your image.
So what is this rule of thirds?

Start of by mentally dividing up your image using 2 horizontal lines and 2 vertical lines, as shown above. Once you choose the main element in the scene (like the small cabin in the picture above), you position that focal point along those lines, or at the points where they meet.  Not only is the cabin in the intersection of the these points, also notice that the snow on the ground also stays in a third of the picture.
In landscape shots, most people tend to position the horizon along the center of the frame.  Instead, place the horizon line along in the third area and see your shot improve dramatically.

The idea is that an off-center composition is more pleasing to the eye and looks more natural than one where the subject is placed right in the middle of the frame. It also encourages you to make creative use of negative space, the empty areas around your subject.
You can use this technique in portrait shots as well.  As you can see in the portrait below, the models faces are in the third area of the image.  In portrait  photography, the eyes are the crucial focal point that makes or breaks the image... those gorgeous smiles help too! When photographing moving subjects, position them as normal, but also pay attention to the direction they're moving. As a general rule you should leave more space in front of them than behind, to show where they're going.

As with all rules (at least in photography), the rule of thirds doesn't apply in every situation, and sometimes breaking it can result in a much more eye-catching, interesting photo. Experiment and test out different compositions even if they go against any "rules" you've learned.  And there you go... a great tip to make your shots even better!  Keep shooting!
www.mikemellizaphotography.com
Posted by Unknown at 8:51 PM No comments: 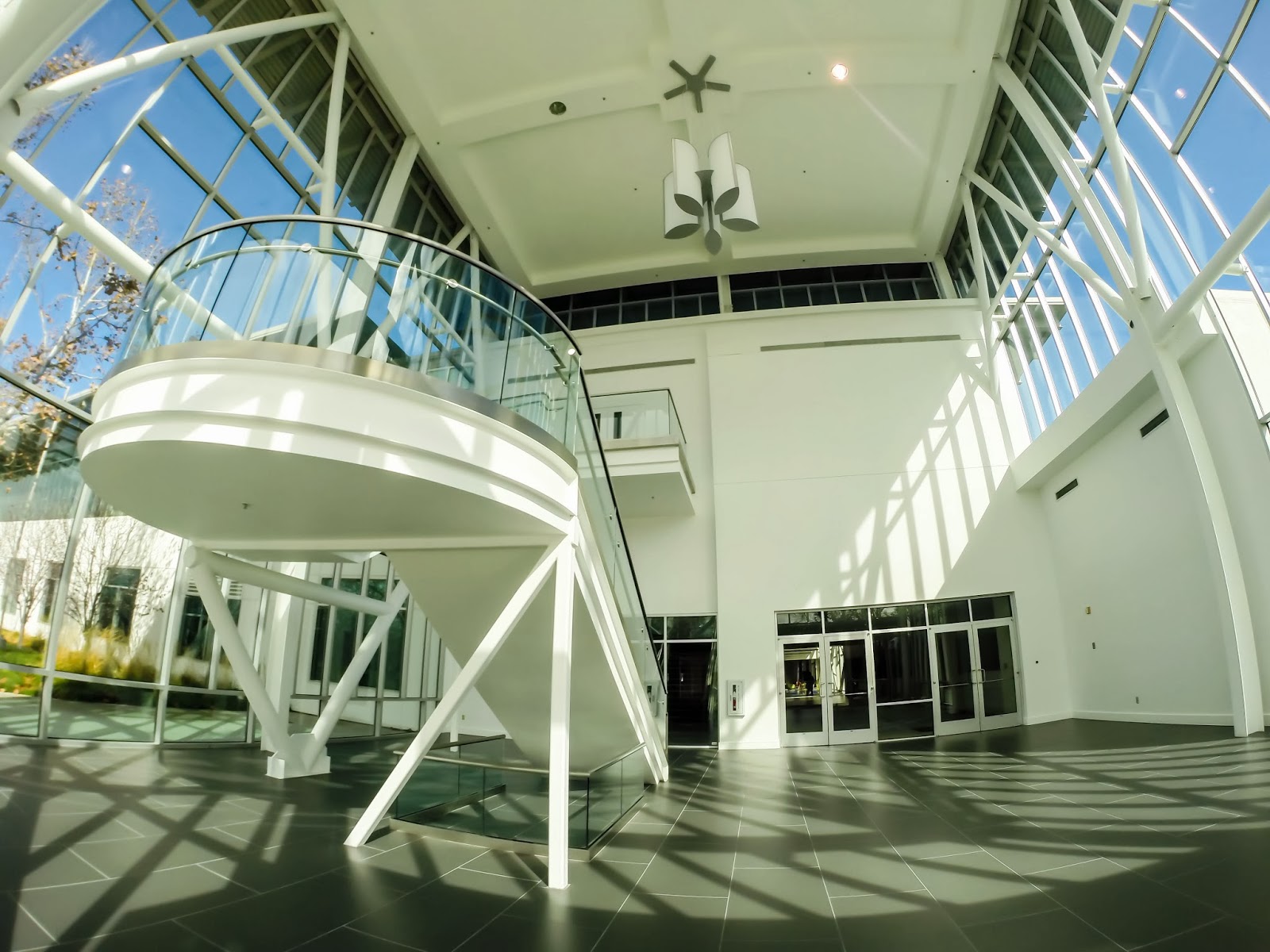 Although I love doing family portraits, head shots, and fashion related photography, I am really finding a space to delve into architectural photography.  I like the challenges and very much enjoy the details and creative ways that architects and builders use to make art come to life in a very functional form.  Here is a sample of my work...

Choosing a Location for your Family Portrait Photoshoot 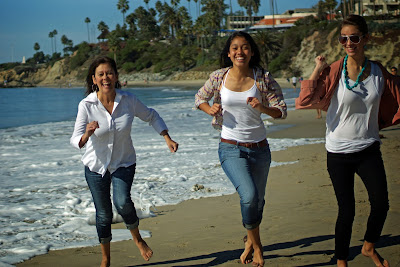 Most families choose to have their family portait created on location. It’s one of my specialties and why families select me to be their photographer.

When clients contact me, I make sure to consult with them about their vision of their family portrait and add suggestions and ideas to help with this creative process.  I’ll help you choose a place that is important to you and is appropriate to your family’s lifestyle. I’ll also determine the best time of day at the location you choose.  It's all about getting the "right natural light" which makes a huge difference in the end, which produces the most beautiful shots. 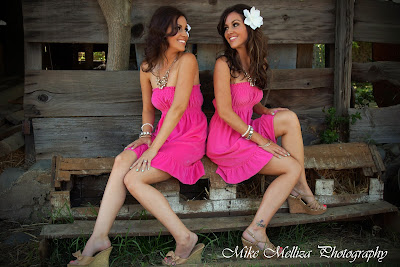 For some families, your home is the right place to be photographed — whether it’s inside around the fireplace, on the deck, or in the garden.  For other families, an outdoor location is more appropriate. Perhaps it’s a favorite trail where you go for a walk together each Sunday afternoon, your favorite fishing hole, or the bench where you watch the sunset over the islands.

Active portraits can include running, soccer, football, basketball, golf, bicycling, skiing or snowboarding, sailing, or any other favorite family pursuit. Your imagination is the only limit!

If you’re drawing a blank, I will be happy to suggest locations during your initial consultation.

Here are a few of the favorite locations in the greater Sacramento area that families have selected for their family portrait:

When shooting at outdoor locations, prepare for the unexpected!  Weather is the biggest challenge, especially during the fall and spring months.  As a professional, my first priority is keeping you and your family safe (and dry... haha!).  I'll keep an eye on the weather and keep in contact with you as necessary as the photoshoot date approaches near.

But even with the best planning, Mother Nature can be tricky... Weather can change quickly which even the best weather person cannot predict.  I always try to think of alternative locations and quick thinking solutions to issues such as a drastic change in weather.

In the family portrait below, my client requested an outdoor shoot in the beautiful and historic Old Sacramento area.  The weather reports looked great all week, but on the day of the shoot, the weather turned cold and windy very quickly!  It was really the wind that caused most of the problem.  If you know this area, you know that many of the streets and walkways are unpaved and dusty, which created a mini wind storm... not fun!  I was able to switch gears quickly and eyed some areas that gave some sort of shelter from the elements.  I also quickly and creatively dragged some props such as the bales of hay and strategically placed them near those old wine and cargo boxes for a nice antique looking background.  By pulling together this "instant studio", I was able to get this young family and two sets of grandparents out of the cold and dusty wind and get them the great family portrait they wanted.  It ended up to be a great spot to take some shots and we waited for the weather to calm down to get their outdoor shots.  They are a great looking family!... don't you think? 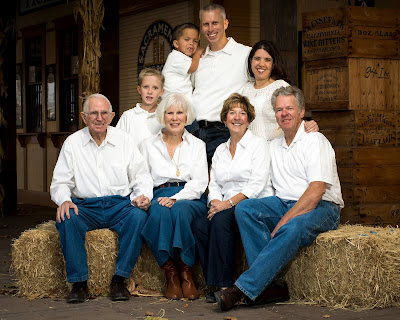 Visit my website at... http://www.mikemellizaphotography.com/ for some photoshoot ideas.  I'm happy to help!

Posted by Unknown at 7:32 PM No comments:

Family Portraits... What to wear? 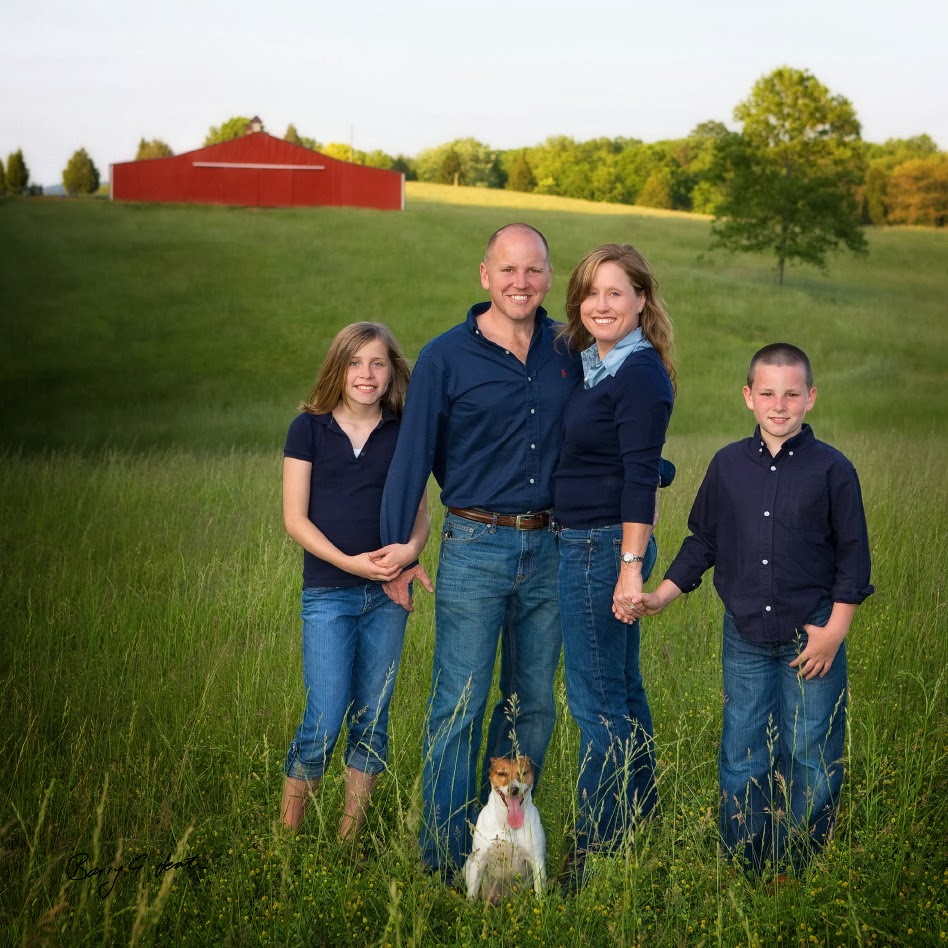 The family portrait shows a prearranged sense of design, arrangement of its elements, a uniformity of expression, and in many instances, a coordination of color and clothing (see picture shown above).  Although each family member pictured here is wearing a different (albeit similar) outfit, the colors coordinate and expresses a sense of unity... a strong family bond!  But it also highlights the individuals faces and expressions because the viewer is not distracted by fancy designs or clashing colors.  This is especially useful in larger families as shown below. 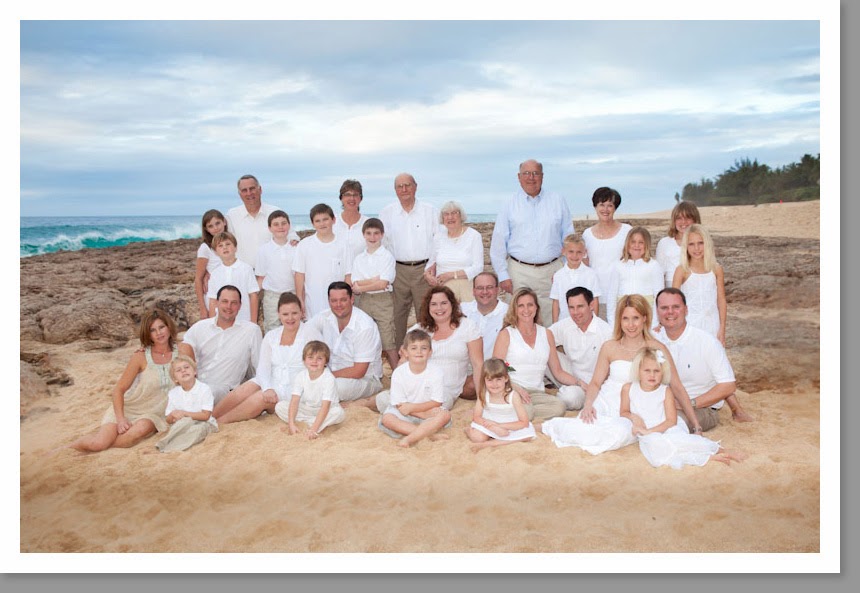 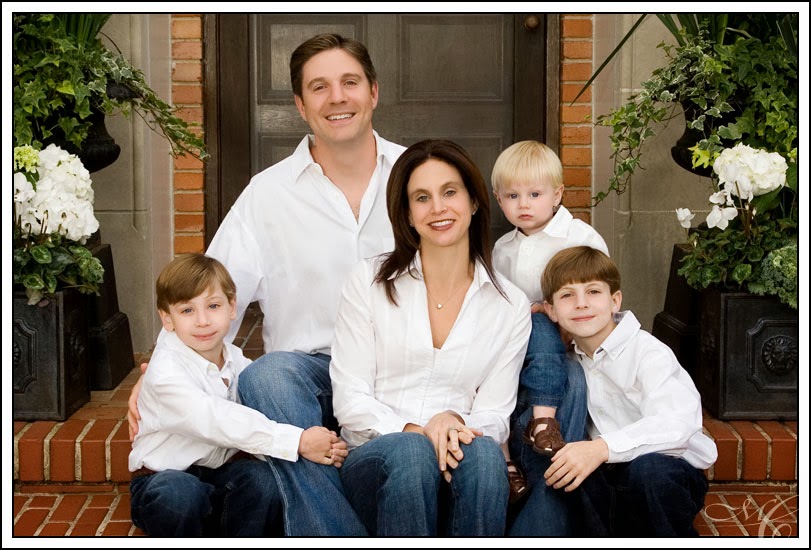 But this rule does not always apply.  Again, it is really up to the client's taste in how they want there portrait to ultimately look.   What if you don't want to totally match?  That's fine too.  My advice is to pick a color palette of two or three colors for outfits, be sure to accessorize and most importantly…be comfortable!  I know this advice can still leave clients with a lot of questions, so I thought I would provide you an outfit inspiration for the upcoming Fall season.  Again, be playful and accessorize, but if you stick to a particular color palette, you can't go wrong. 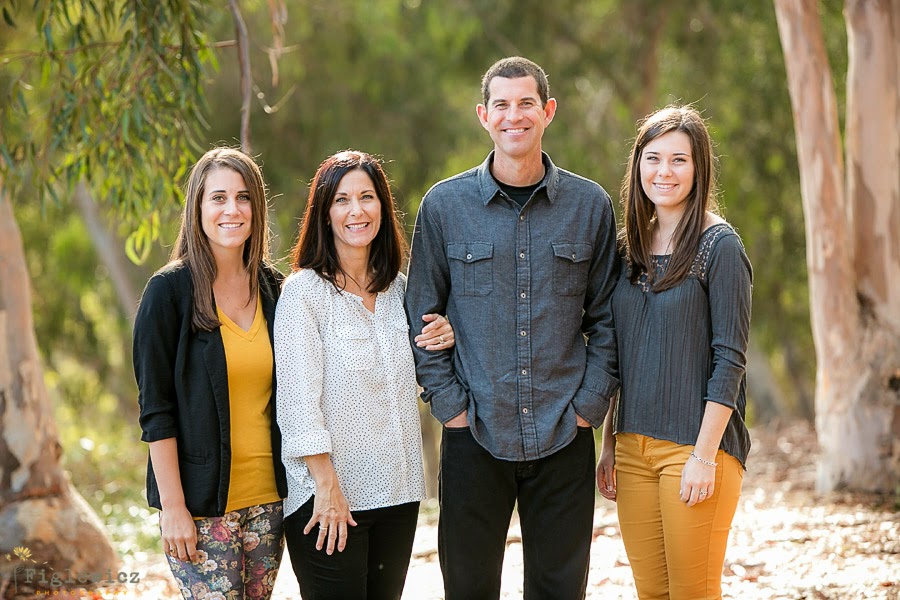 When looking to put together outfits for your family, start with the kids.  You can choose a bold pattern for one of the children and pull colors from that pattern to determine the color palette for the rest of the family.  I often find it easier to look for outfits at stores that cater to the whole family like Gap and Old Navy where you can dress everyone head to toe without breaking the bank.

I hope these tips help inspire the look you are seeking for the perfect family portrait.  Remember... Life is a story.  Share your life story through the beauty of your family portrait!

My Fall calendar is filling fast and I’m looking forward to seeing lots of familiar faces as well as some new ones.  I can help you with your portrait in time for those holiday cards.  A framed family portrait is also a great gift for that parent or grandparent that has everything!!!  Shoot me an email to book a shoot at mikemelliza.photography@gmail.com or call me at (916) 572-6272. 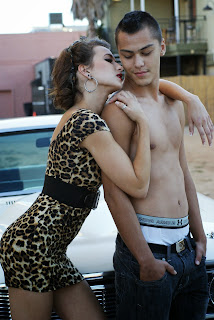 Here is an un-edited shot that I took about a year ago in the old historic section of Roseville, CA.  I was on a photo-shoot and had this beautiful female model in my camera lens when I noticed that her eyes kept peering over to a young gentlemen that was walking through the neighborhood with some of his buddies.
These guys were intrigued by the shoot itself and had their sites locked in on the gorgeous gal.  My model yelled out "I want him... in the shoot", pointing a finger toward one of them.  I looked at him, asked him if he'd ever modeled, and also if he were interested in jumping into the shot.  With some shyness, he replied that he never modeled before and then his friends coaxed him into standing next to the female model. His buddies were laughing and joking.  I then asked (after I had him sign a model release form) if he would mind taking his shirt off.  He looked at me for a quick second and then obliged and removed his shirt.  My model was smitten by his bravado and you could feel the electricity coming from their mutual attraction.  I stepped back and let the shutter fly!  Find the connection and feel the energy... That was a fun shoot! 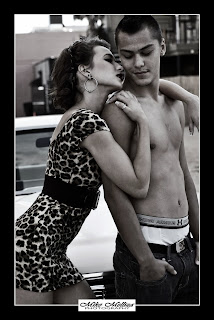